In the food processing production line, high temperature sterilization is very important. The main target of sterilization is Bacillus botulinum, which can produce toxins that cause fatal harm to the human body. It is a heat-resistant anaerobic bacteria that can be exposed to a temperature of 121°C. It will lose its biological activity within three minutes, and will lose its biological activity in an environment of 100°C for about 6 hours. Of course, the higher the temperature, the shorter the survival time of the bacteria. According to scientific testing, sterilization is more suitable at 121℃. At this time, the packaging has good heat resistance and the food taste is relatively good. When sterilizing at 121°C, the F value of the food center reaches 4, and B. botulinum will not be detected in the food, which meets the requirements of commercial sterility. Therefore, when we sterilize meat products, the temperature is generally controlled at about 121°C. Too high a temperature will adversely affect the flavor of the food! 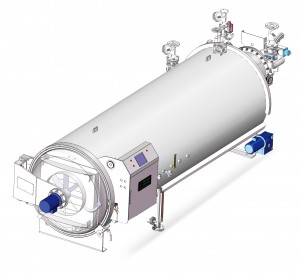 During sterilization, all the food in the pot is soaked in hot water, and the heat distribution is more even in this way.

After the food is put into the pot, water is not added first, but directly into the steam to heat up. Because there are cold spots in the air in the pot during the sterilization process, the heat distribution in this way is not the most uniform.

This method uses nozzles or spray pipes to spray hot water onto the food. The sterilization process is to spray mist-like wave-shaped hot water onto the surface of the food through the nozzles installed on both sides or top of the sterilization pot. Not only the temperature is uniform and there is no dead corner, but also the heating and cooling speed is rapid, which can comprehensively, quickly and stably sterilize the products in the pot, which is especially suitable for the sterilization of soft-packaged foods.

This method of sterilization was introduced by France. It cleverly combines the steam type and the water shower type. A small amount of water is added to the pot to meet the circulating spray use. The steam enters the country directly, which truly realizes short-term high efficiency, energy saving and environmental protection, and is suitable for special products. Of sterilization.

High temperature sterilization is very important for a food processing plant. It has the following two characteristics: